The recent flooding that hit Tokomaru Bay was unlike anything the locals had ever seen. An unprecedented 48 hours of torrential rain dangerously swelled local rivers, flooded houses, and left the area covered in a thick layer of mud.

Tokomaru resident Megan Williams remembers her eight-year-old grandson waking her up amid the deluge. “He was knocking on our door going ‘Nanni, Papa, there’s water everywhere and it’s going to come into the house’”, remembers Megan. When she opened her front door, she saw that the water was just inches away. 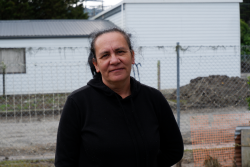 “We’ve lived here for 21 years, we brought our children up here, we got married here, but ever since we’ve lived here we never had it this bad,” she says. Megan breathed a sigh of relief when she saw their cats and  chickens had sensibly taken refuge on the trampoline. Later that day Victim Support’s Gisborne Service Coordinator, Vicki Crosswell, along with Tokomaru Bays local police officer, Toa Saulala, were on Megan’s doorstep with a box of kai.

The food packages had been donated to Victim Support to distribute to people affected by the flooding. Victim Support were active in the area doing welfare checks on residents, offering emotional support - in some cases people had lost everything - along with ensuring people were connected with the wider response to the flood from the council and other agencies.

“We were liaising with the local kaumatua and the iwi that were out in the community and taking directive from them on what was happening,” says Vicki. “This part of Tokomaru Bay was a little bit left out of the loop and we walked Megan through what had to be done really.”

Many locals, including Megan and her family, had to evacuate their homes as there was no running water and septic tanks overflowed with sewage mixing with all the other debris.

“We have a locally based staff Support Worker who will continue to work with families,” says Vicki. “It’s part of a collaborative community response in Tokomaru Bay, where we want people to have the best chance of getting their lives back on track with the harm from the trauma of the flood minimised,” she says.

This article first appeared in our Voice newsletter.