A mother and daughter’s passion for supporting others

“Watching Mum in my teenage years going back to studying was so inspiring and helped me to see what can be achieved.”

Supporting victims is more than a job for Rita Harris and daughter Ashley Field. For both women, it's become a cause, fuelled by a passionate drive to do what's right. 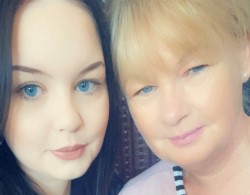 Rita, a social worker for Wellington Women's Refuge and Ashley, a front-line call taker at Victim Support Contact Service, have personal experience of what it takes to advocate for those in need.

"I have had to fight for Kasey all her life. Through caring for her, Ashley and I both naturally became advocates along the way. Ashley and I are alike in that we both get the fire in our belly when we see that something’s not right." says Rita.

Rita began studying for a Bachelor of Social Work once her children were grown. As someone who has been personally affected by family harm, she was drawn to a part-time role with Porirua Women's Refuge while working towards her qualification.

"Most of the women I engage with want their life to be better, so it's great for me to see them find themselves again and become more empowered – as well as safe," says Rita.

Rita's chosen path played a crucial part in daughter Ashley's decision to leave her job as a receptionist and take up her role with Victim Support. The tightknit Contact Service team take calls 24/7 from the public as well as managing Police referrals to provide support to victims of crime, trauma, suicide and family harm.

"I knew the minute I started working at Victim Support this was the agency for me. The work we do is so critical. It’s sad what goes on, but it’s a blessing to be able to be there for people when they need it most," says Ashley.

Inspired by shared experiences, both Rita and Ashley admire each other's dedication to supporting those in the community who need it most.

"Mum has been a light in so many people’s lives over the years, so many people care for her. She attracts people, she just glows. Watching Mum in my teenage years going back to studying was so inspiring and helped me to see what can be achieved," says Ashley.

“I’m so proud of Ashley. She’s an empathetic young woman having to hear about lots of adversity and tragedy happening to people every day. It can’t always be easy, but she’s always doing what she can, thinking ahead and making sure everything is covered. For her to be able to respond like that is so valuable,” says Rita.