Partnering with the Police

Victim Support provides a hugely valuable service to people impacted by crime, trauma and suicide, and one of the reasons we can do this is the close and collaborative relationship we have with the New Zealand Police, a relationship that has been around since day one of our organisation.

The idea for a group catering to the needs of victims of crime originally came from a member of the New Zealand Police. In the late 1980s, Gisborne Police Court Orderly Kevin Joblin, concerned at the lack of help being offered to victims at court, set up a small Victim Support Group. Fast forward 35 years and from small beginnings, Joblin’s idea has grown exponentially. Today, Victim Support has representatives around the country, offering valuable practical and emotional support to over 43,000 people each year. And while we are an independent incorporated society, we have maintained an extremely close relationship with Police since those small beginnings in Gisborne. 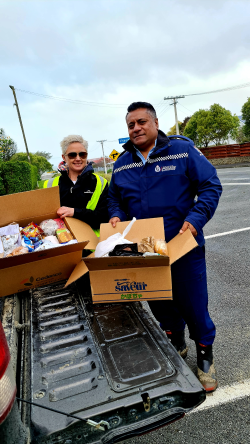 The relationship between Victim Support and Police was cemented in 1998 with the signing of a Memorandum of Understanding. This Memorandum sets out the commitment of Police and Victim Support to work closely and collaboratively together to ensure victims get the support they need. It also commits to focusing work across a broad range of areas to improve support for victims, especially for people at the highest risk of victimisation and repeat victimisation. It also sets out an arrangement for Police to provide pro-bono office facilities in police stations throughout the country, and for our National Office in Police National Headquarters in Wellington.

There are currently 51 police stations nationwide, stretching from Kaitaia in the north to Invercargill in the south, providing office space to Victim Support team members. In addition to this office space arrangement, we also receive a large amount of our referrals through Police – over 18,400 of our victim referrals came from Police in the last year alone.

“The relationship we have with Police is crucial,” says Wellington Area Manager Melissa Gordon. “When everyone is clear on both sides about expectations and there’s trust and confidence in each other, then everything is quick and easy, and the victims reap the benefits. That’s what it’s all about.

“Victims often feel intimidated by Police. They might feel nervous and confused. We can be a middleman, explaining and advocating for them.” 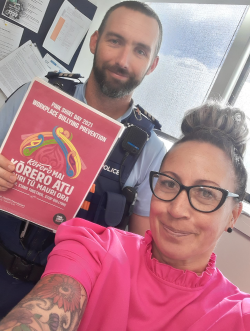 Kelly Katene, Service Co-ordinator for Mid and South Canterbury, agrees. “Victims need to have breathing space between information gatherings. If all the information comes too much, too soon, they don’t process it. Police have a lot of information to give, our job is to act as the go-between, making sure the information is spaced out and communicated in a way they can absorb and understand.

“If we don’t work well with Police, collaborating and trusting each other, then victims don’t get the benefit.”

Whether it be making referrals, sharing office space, distributing goods or simply swapping information over a morning scone in the tearoom, every day around the country Police and Victim Support are working together to serve their local communities.

“We bond with Police at the stations we’re at,” says Kelly Katene. “You get to know their ethos, the vibe in the station, and how to communicate with them. So long as we keep doing a good job, working with respect and confidentiality, then the relationship will continue to go well.”