Following his retirement from the British Police force and a subsequent move to New Zealand, Martyn was keen to get stuck into some volunteering.

“I’m not legally allowed to work here until the end of 2022,” he explains. “So, I began researching volunteering opportunities, looking for a way to keep busy.”

Victim Support stood out to him immediately due to his Police background. “When I was with the Police in the UK, you just went to a job and victims were sort of side-lined,” he says. “You’d update them if someone was arrested or charged but you never really took their needs into consideration – whereas with Victim Support, we’re entirely victim-focused.”

Focusing on the victims’ needs rather than the offenders’ was a refreshing change for Martyn, but one that didn’t come without a bit of unlearning. 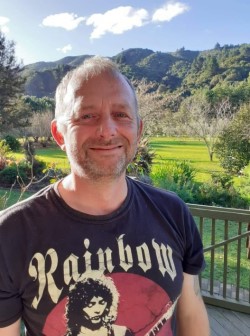 “In the initial training I was shown up a bit, because if you turn up for a job as Police, you’re the one telling people what’s going to happen, and I was still in that mindset.” The training taught Martyn the importance of following the victim’s lead and asking instead of telling.

Even a couple of years into the role, Martyn has to actively work on not falling back into a Police mindset – something that can be challenging in times of crisis. “I attended an incident a few weeks ago and there were Police everywhere – I had to remind myself that that isn’t my job anymore, I don’t have to take statements from anyone or anything like that. My focus is solely on supporting the victim.”

“Sometimes it’s easy to feel like you aren’t doing much in the grand scheme of things, and how could people possibly be getting anything out of your support,” he says.

“Then you’ll give someone a ring to check in and they’ll say how nice it is to have someone to talk to that isn’t family or friends, someone removed from the situation.” It’s these moments that keep him motivated.

Martyn encourages anyone considering becoming a volunteer support worker to give it a go. “I think a lot of people may worry that they’re not capable of doing it or that they haven’t got the qualifications, but once you’ve done the training, you’ve got the basics, and from there you evolve into the role,” he says.