Volunteer dedicated to her community

Maria has been a volunteer support worker for six years.

During this time, she has supported multiple people in her small community, become a trained homicide support worker, and was one of many victim support workers who travelled to Christchurch to support the victims of the mosque attack.

For Maria, this work is a privilege.

“For people to trust you and let you into their life at a time when they’re at their lowest is a big deal,” she says. “I always make sure to thank people when I’m supporting them: ‘thank you for talking to me and thank you for sharing your story.’”

Recently Maria’s efforts were recognised when she received a Pride of Workmanship/Community Service award from her local Rotary. The award recognises Maria’s dedication and commitment to her role and her community. 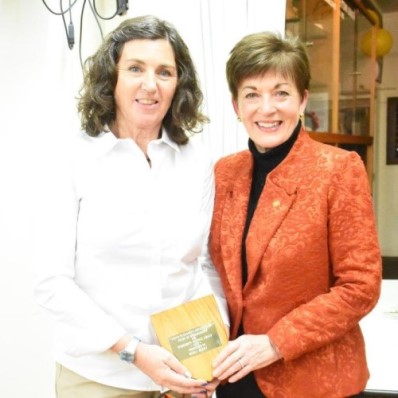 She was nominated by her service coordinator Gwen, who describes her as an “exceptional volunteer support worker.”

Gwen noted that Maria shows a huge commitment to victims in their small community and will often sacrifice her personal life to ensure victims receive the support they need.

Maria is grateful for the support she receives from Gwen, as well as support from her wider team. “The support is really valuable,” she says. “It’s not only from our managers but also fellow volunteers, as well as ongoing training, and access to counselling if we need it.”

She sums up her motivations for her work pretty simply: “people need help, they need someone to listen to them.”

“It’s knowing that you can actually help someone get out of that immediate situation,” Maria says. “It’s not saying everything is going to be okay – because you could never say that – but it’s just being there and keeping in contact until you know they don’t need you anymore.”

“One day it could be me on the end of the phone needing help,” she says. “It could be any one of us. I’d want to know that I would have someone looking out for me, that help is there.”