A different kind of grief

“Allan was an amazing person. I’ve lost somebody so special.” Two years after the death of her beloved husband Allan, Ann struggles to talk about him without tearing up. “The sad thing is we can’t make any new memories. My soul mate is gone and that is that. He’s left a big hole.” 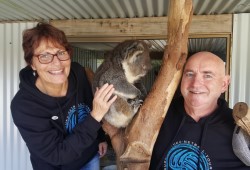 Ann met Allan when she was 18. They were together for 41 years before he tragically took his own life in 2019.
He’d been going through a tough time mentally but was accessing services and trying to get well. “We thought he was doing okay and getting the help he needed,” she says. “He wasn’t.”

At the time of his death, 62-year-old Allan was staying at a mental health respite centre. He went missing from the unit on Saturday around lunchtime, a search was mounted but late the following morning Police arrived with the news no one wants to hear.

The next few days were a blur of shock, grief, and a trip to the morgue to identify her beloved. Friends and family gathered for support, and during all the chaos, Deidre from Victim Support showed up. Ann says one of the most helpful things Deidre did early on was to make space for her and her daughters to talk alone. “Without prompting, she took control and asked everyone to move into another room to give us space and allow us to talk amongst ourselves,” she says. “This was incredibly invaluable and stood out as such an insightful and important role for Victim Support to play in helping us in those early days.

“I can’t speak highly enough about Victim Support, what an incredible organisation. Deidre was phenomenal in her support of us. She was always on hand, checking in and popping over to offer support. She explained the coroner’s process, put us in contact with bereavement support services, and helped us access counselling.

“She even came along to all the meetings we had with the DHB when they were trying to explain what had happened with Allan’s care, taking notes and helping us decipher all the information. She’s amazing.”

Ann is just one of thousands of Kiwis who are impacted by suicide in Aotearoa each year. John is another, his 29-year-old
son Ollie took his own life earlier this year. His death has hit John hard. “I was angry at the way he did it, but that has
now been tempered to annoyance. I’m sad to have lost a son, and I’m frustrated that he had so much going for him and
now that is all lost.”

John says that while nothing can take away his pain, it has been good to connect with Victim Support, and have Support
Worker Donne available to talk to on occasion. “Donne says all the right things, but my emotions are still strong,” he says. “The conversations are beneficial, but they don’t change the big picture. Nothing takes away the memory, which is
frequently triggered, but I will learn to live with it.”

“Suicide has a huge impact on people,” says April Marshall, Victim Support’s National Suicide Bereavement Manager.
“Everyone responds in different ways, including within families, because they’ve all had different journeys and their
own life experiences. That’s why it’s good to have a person who is not connected to the bereaved or affected person to
be available to talk to.

“We go in there and assess what each individual or whānau needs. It’s about being open and honest but in a caring way as well. And listening carefully to what people are telling you because that’s where we can identify if someone else is at
risk.”

Alongside April as National Manager, Victim Support has five suicide bereavement specialists nationwide, and all of our
450-plus Support Workers are suicide trained. The Suicide Bereavement Service is funded by the Ministry of Health and
supports around 3,500 clients annually. We work closely with DHBs and other NGOs as part of effective community
prevention networks and our service model is crafted to support close family members, colleagues and friends of the
deceased, as well as people who discover or witness a death. We recognise that each individual client has diverse and
unique needs, and as such our support is carefully tailored to help every single one of them through crisis and recovery.

Recovery is a slow process. John keeps himself busy with all the admin and paperwork required after his son’s death,
“Forms have to be filled in, creditors have to be contacted. I do it dispassionately but it’s occupying me.”

Ann sees a counsellor regularly and has good community and family support around her. “Even though Allan’s death seems like yesterday, I’m doing ok,” she says. “If I become unstuck, I know I’ve got my Support Worker Deidre to call on. I know she has my back no matter what. She’s the most amazing person that I know.

“We are just so thankful for the role that Victim Support played in our lives.”

This article first appeared in our 2020/21 Annual Report.