Just a phone call away

Jaedi never had her phone with her at work. With all the heavy machinery and carts that they drove around the busy Melbourne warehouse, it just wasn’t allowed. On that day though, she had it in her pocket. She had heard that morning that back home in Gisborne there had been an accident. Roads had been closed but how bad it was, or who was involved, she didn’t know. “I remember the day just like it was yesterday,” says Jaedi, “for some reason, I had my phone on me and it was just a hunch. I left it on silent and it was not long after 6 o’clock that the phone calls started coming in and I could feel my phone vibrating.”

When she checked her phone, she could see that there were missed calls from her aunt, uncle, and cousin. There
was a message that told her to call home. “I rang home, as in back here to Gisborne, and my uncle said that we had lost my dad. From there it was just a rollercoaster of emotions.”

Jaedi’s father had been driving his ute on State Highway 35 between Tolaga Bay and Tokomaru Bay. He was hit
by a logging truck. The driver of the truck stopped about 200 metres from the scene of the accident and then kept
driving.

While Jaedi was hastily making arrangements to get herself, partner, and kids back to New Zealand from Australia, her whānau in Gisborne met with Victim Support Worker Erin at Tolaga Bay Police Station. 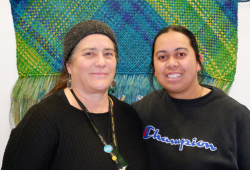 Erin was the family’s Support Worker from the morning of the crash, right through to when the driver of the logging truck was sentenced in court some six months later. “The support was phenomenal,” says Jaedi. “I guess because Erin was a local from the area and there were whānau connections made it easier.”

“It was just nice to know that Erin was there to help us with trying to understand our emotions and what we were feeling. She was with us in court, and helped us access financial support because we all had to leave our jobs,” she says. Through the Victim Assistance Scheme, Victim Support were able to assist in bringing other whānau over from Australia so that they could support each other in their time of grief and through the re-traumatising experience of the sentencing.

“We had said to each other, me, my siblings and family, that once sentencing is all done, we kind of just leave it there and try and move forward. We can begin to grieve because we didn’t get a chance to grieve because it was just one thing after another with getting home and burying dad then straight into court,” says Jaedi.

“Once the sentencing happened, we closed that chapter and then tried to find a new beginning without dad.” Jaedi has permanently moved back to Gisborne from Melbourne. Part of the new beginning was being close to her grandmother, who was forced to deal with the enormity of the loss of her son.

“I just wanted to be home close to dad and be around the family,” says Jaedi. “Dad’s mum is 93 this year and she struggled, so we moved in with her. Dad’s sister who was living in Perth has moved home to look after nan as well. We’re all back together and closer.”

“I still have Erin in my phonebook. It’s nice to know she is just a phone call away if I need her,” she says.

This story first appeared in our 2020/21 Annual Report.