“I was waiting for Suhail, he was supposed to be coming for lunch. He left the office and called me at 1 o’clock to see how I was. But he was running late. I checked my phone.” 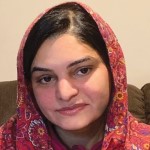 “I knew Suhail was going there, so I tried to call him.”

“I started crying because I called and I called, and he did not answer.”

“Other people were hearing from their husbands and I didn’t hear from Suhail.”

With the agonising waiting for news, and then more waiting to be able to travel, she was finally able to go to the hospital with Suhail’s friend. But he wasn’t in the hospital nor was he on the injured list. He was missing. Later she returned to the hospital, and then terrible news.

“Suhail’s older brother was there…his eyes were red, and he said Suhail is no more.”

“I went and saw him at the funeral parlour, where they allowed me to see him – I spent some time with him, and he was smiling.”

Now Asma, 30, has been forced to rebuild her life, with help and encouragement from her family, the Pakistani community, and Victim Support.

Asma’s support worker, Kala, met her a week after the shootings, saying “She’s a very courageous lady Asma, very strong.  I provide encouragement for her.”

Victim Support arranged financial help for Asma in the immediate aftermath of the shootings. This enabled Asma to pay for the basics of life, such as rent, groceries, phone and internet costs.  This was just the beginning of a long journey for her.

“I want to do something, so I asked Kala to help organise some professional English lessons.” Kala arranged those lessons and helped deal with day-to-day issues. She’s learnt to drive and has found a part-time job translating at Christchurch Hospital. Besides English, Asma speaks Hindi, Urdu, and Punjabi. This is all part of her enormous effort to rebuild a life after this devastation.

“He loved nature and photography.  Every weekend we used to do something like a picnic or go to a restaurant. I miss that.”

“When I take my daughters to the park, they ask to be lifted on to the monkey bars. He used to do that with them. I can’t do it like he did.”

“They say, where is Daddy, when is he coming back? I find that hard.”

Moments like those bring back memories of March 15. Inspired by the memory of Suhail, Asma keeps positive as she rebuilds her life. Suhail is buried at the Linwood cemetery in Christchurch along with many others who died in the attacks, and so Asma decided to stay in Christchurch.

“At first I wanted him buried in Pakistan but then I changed my mind,” she says.

“Now I will always stay here because Suhail is here,” she says.

“I always want to be near him.”