Walking the journey of grief together

Early one morning, while on his way to work, Tina’s husband John was fatally struck by a vehicle.

Initially, Tina was hesitant to talk to anyone about her grief.

“We all backed off from everything at first because we just didn’t know what to do,” she says. Victim Support Worker Donna had been in touch with Tina and her family, but due to the shock and trauma of the situation, they needed some time by themselves before talking to anyone else.

Eventually, Tina reached a point where she realised she needed help. “I remember calling Donna back and telling her that I didn’t know what to do, I wasn’t coping, and I needed help.”

From that point on, Donna has been a reliable constant in Tina’s life, walking alongside her and her whānau as they navigate grief.

One of the most impactful ways that Donna was able to help Tina was by organising counselling appointments for her – something Tina didn’t even realise she needed. “If I didn’t have Donna, things would have been a real mess,” Tina says.

As Tina talks about Donna, her sincere appreciation is obvious: “I can’t even put her into words, she’s just been so awesome with everything she has helped me and my whole family with – to me she’s a part of our family now.” 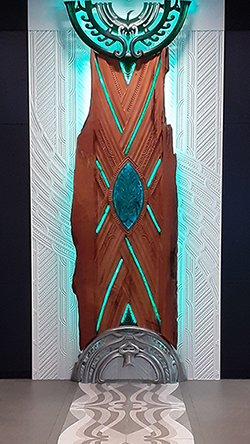 Before he passed away, Tina’s husband had been working on a set of four carvings, to be displayed in the foyer of the National Reserve Bank in Wellington. The final carving was eventually completed by his work colleagues and unveiled in a ceremony late last year.

Initially, Tina was hesitant to attend the unveiling. “It had been delayed for so long due to Covid and other issues, so by the time it came around, I wasn’t even sure I wanted to go,” she says. “It was really hard knowing that it was a part of him, that he had worked on. It was the thing he was on his way to do when he died.”

The day of the unveiling, Donna was by Tina’s side, providing much-needed support. “I have to be honest, it was a hard day,” says Tina. “But it made it easier, talking to Donna the whole way there, and having that support with me.”

Donna was honoured to be invited to stand beside Tina and her family on this important day. “To gather with the whānau I have supported was a reminder for me that working for Victim Support is a privilege. It’s a privilege that victims allow us into their lives, and an absolute honour that they trust us, share with us, and allow us to walk with them,” she says.

In the end, Tina was happy she went – to support her children, honour John’s memory, and to view in person a special detail on the carving that she had been waiting to see.

“On the carving there is a little mark you can see quite clearly, but nobody would ever notice it,” Tina explains. John was startled by a colleague when he was carving one day, and accidentally pushed the blade deep in and across the piece. His workmate ended up fixing most of it, but when Tina went to view the carving, she saw the small mark that was left.

“That was John,” she laughs, “leaving his mark.”